What is a Embryo Grading?

Embryo grading is the method used to evaluate embryos for transfer. During IVF, embryos are cultured leading up to the day of transfer and are evaluated for quality during each day of the grading cycle. It’s critical to evaluate egg maturity before fertilization because a mature egg has the greatest chance of successfully getting fertilized.

The embryo grading process begins after oocyte (egg) recovery. At this stage, eggs are placed into an incubator with controlled levels of carbon dioxide, oxygen, and nitrogen for several hours, after which an embryologist takes the eggs from the incubator, removes the cumulus cells surrounding them, and checks them for maturity. Mature eggs undergo intracytoplasmic sperm injection (ICSI) and are placed back in the incubator. It is important that only mature eggs undergo ICSI, as immature eggs may fertilize when injected with sperm but may not produce a viable ongoing pregnancy. Once an egg undergoes ICSI and is fertilized by sperm, it is called an embryo.

On the first day, after insemination, the embryos are checked for fertilization but not graded. Embryos are graded at Day 3 and after Day 5, for further developmental evaluation until it reaches the blastocyst stage. This is the developmental stage that occurs prior to implantation of the embryo in the uterus. Blastocyst implantation after day 5 is beneficial because it leads to more viable embryos that have already overcome possible developmental hurdles.

If the embryos were cultured to blastocyst after day 5 the goal becomes evaluating each embryo for optimal blastocyst development for a successful IVF. Preimplantation genetic test can also be done at the blastocyst stage. Embryos that aren’t chosen for transfer will be evaluated to see if they’re suitable for cryopreservation for possible future use. New Hope Fertility Center has recently been in the news as a leader in using abnormal embryos for in vitro fertilization transfers because we understand that the few cells that are biopsied might not be indicative of an unhealthy embryo.
It’s important to note that embryo grading is a subjective process. An embryologist makes an assumption about an egg or embryo’s maturity and potential viability based on their own experience and expertise, but there is no clear cut way to evaluate whether an embryo will result in a successful pregnancy.

How to grade a cleavage stage embryo: After fertilization, but before blastocyst stage –

Embryos are graded on an A, B, C and D scale which is based upon the rate of development on that particular day, fragmentation percentage, synchrony of cell division, and evenness of cell division.

How to grade a cleavage stage embryo: Once the embryo has reached blastocyst stage-

Blastocysts are graded by total number of cells, cohesiveness of the cells making up the ICM (inner cell mass) and trophectoderm, and the expansion of the blastocoel (inner fluid filled area of a blastocyst). The ICM becomes the baby and the trophectoderm becomes the sac and placenta. 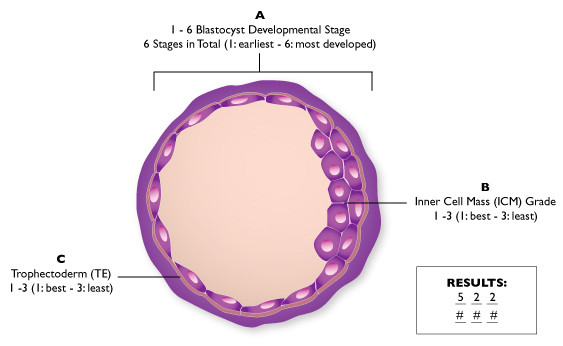 (C) The third number corresponds to the quality of the trophectoderm
(1= best quality)
Many cells, tightly packed